We beat for peace

We beat hard for the peace

Figurehead of the Drummers for Peace Movement, this great event which brings together the greatest number of musicians, amateurs and renowned artists in a great concert, is a plea for peace.

Because to create is to resist, « We beat for Peace » will bring together 160 drummers of both genders from all over the world with Paris as its epicenter, for a multidisciplinary artistic performance whose common language will be that of percussion.

Placed under the high patronage of UNESCO, the Drummers for Peace will be accompanied by prestigious ambassadors : musicians Nina Attal, MB 14, Fills Monkey, 2 Brazilian and Antillean batucada, the first drums of the Republican Guard, Hip Hop dance and tap dancing, all led and orchestrated by the Funk group Blackfoxy to make the planet dance to the rhythm of peace on May 15, 2021 in Paris.

The clip “Talk about Peace”

In order for peace to make more noises than conflicts

The show «We beat for Peace», born following the 2015 terrorist attacks, is both a tribute to the victims of wars and terrorist attacks. It is a testimony of our times to future generations so that this intangible good of peace is just as important and urgent as the safeguarding of our planet.

At a time when the drastic constraints linked to Covid-19 no longer allow the cultural sector to project itself, art is nevertheless projecting itself, using all existing distribution channels so that life continues.

Creativity is thus born from constraint, and we are rethinking our social relations, also between musicians, directors, artists’ collectives and a whole industry whose passionate members are the roots of this kind of show.

Directed by the very fantastic Eric Checco, used to major events (Danone Cup, commemorations of November 13, etc.), a sober and aesthetic scenography will welcome the pearls of the programmed talents like a showcase. Many surprises and “digital‘‘ happenings will be on the menu for an event that counts, thanks to the energy of the Volunteers and founders of the « Drummers for peace » movement, demonstrating all the power of the artistic potential of peace. Director David Montagne will be at the helm to capture this exceptional moment. 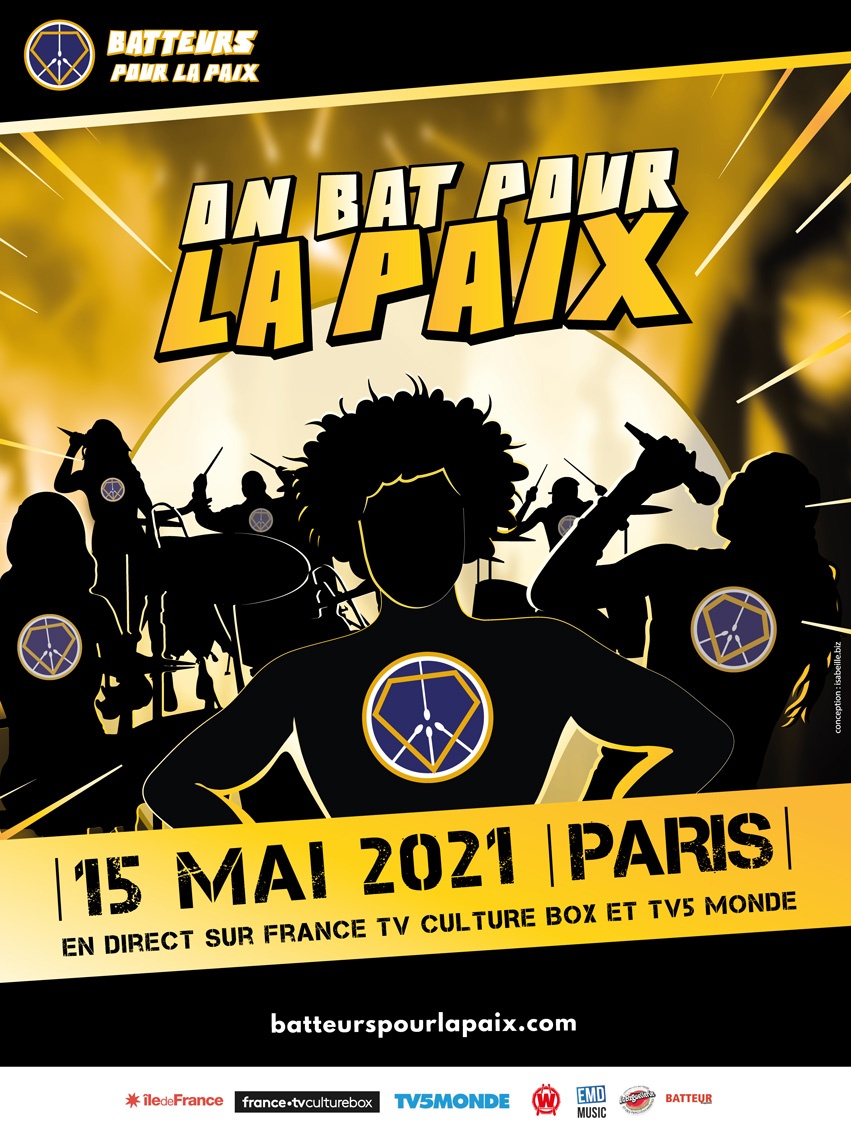 Duration of the gathering : 3 days

They all have hearts beating for peace…

Blackfoxy is a live formation which raises the rooms. The group draws its references from the 70’s with Motown, to the 80’s, revealing inspirations from African American music, Funk, Soul, Disco, Jazz funk and movie music.

Subscribers to performances such as the show La Grande Jam with the final at the Trocadéro with 50 drummers, Blackfoxy has been committed to peace since the 2015 attacks. Klaus Blasquiz, one of Blackfoxy’s four voices, will also be the conductor of the 160 drummers. He will direct them, guide them so that each stage of the show, of this story of peace told through songs, can make sense in substance as well as in form.

Nina Attal, author, composer, always inspired by blues, rock, rhythm’n’blues and the groove of black american music, today she defines her own contours, mixes her own ingredients to deliver one to us a singular version, raw and more than ever, accompanied by her guitar.

MB14, oscillates between Hip-Hop and lyrical singing, between world music and electronic sound effects, human beatbox… He addresses existential themes such as life, death nostalgia, the artist’s doubt or even time travel. MB14 show you the voice and takes you on a sound adventure, like a true auditory illusion.

Imany, is a singer with a big heart. Inspired by folk, soul and blues, her songs are reminiscent of great singers such as Lauryn Hill or Nina Simone. Invested in the fight for equal rights, she has also participated in several concerts in the United States as part of Pathway to Paris, invited by Patti Smith, in order to mobilize for the fight against climate change.

Princess Erika, is not afraid to speak out. Her first success was called «Too Much Blah». Princess Erica African at heart and European by birth, claims independence of tone. Her positions are clear and her speech too. Princess Erika is a woman of character and Peace…

The Fills Monkey, is the duo of confirmed drummers, Sébastien Rambaud and Yann Coste, formed in 2005. They combine juggling, rhythms, percussions, and clowning in their sessions to contrast with the environment of drummer exhibitions, a little toot serious for their taste !

Krishoo the famous drummer of FFF.

Leela Petronio is Franco-American. She is an international reference in the world of tap dancing.

The Batteurs pour la Paix company, created in 2011 in Villeneuve-la-Garenne by Kalid Bazi. The company Drummers for Peace navigates through a repertoire of contemporary writings in which men come up against a constraining geographic or geopolitical environment. Since 2014, the company has produced around ten audiovisual formats such as «La Grande Battle», the live performance at La Cigale and concerts dedicated to peace in France, Belgium and Morocco. And the main actors of this unprecedented show… the drummers !